Just a quick update on where things are.

First, this type of update is likely to be more common. I had previously intended to only really blog about major changes, but I would rather journal the experience a little more closely. I think it’s easy to lose sight of just how much work is involved in game design, even if you’re an experienced developer.

Since last time, I’ve gutted previous scenes and scripts to move to a puzzle-only build. This will be the puzzle-y prototype I’ll build for the web and release as a demo to get feedback, hooopefully this month.

Since getting that build lined up, I’ve been wrestling with various ways of creating a cool “paint smear” effect for the magic. Unity offers a dozen or more paths to that same concept, though so far none have panned out.

1. LineRenderer
First I wrestled with LineRenderer for a day or so. It’s not too bad, really. You can “draw” on the game palette like it’s a tablet drawing app, though there are a few weird artifacts (additive shaders + line strip overlap = sharp stuff). What really turned me off about LineRenderer is how (seemingly) non-performant it is in this scenario. Lots of memory re-allocation/tweaking/etc., just seemed like it was going to cripple the mobile builds. I didn’t actually verify, though.

2. Particles
Next I played with particle effects for awhile. This is one of those subsystems that I think you can never have enough experience with, and as a corollary, you’re never really good enough to get your imagination down. It triply doesn’t help that I’m stuck firmly in Programmer Art land, still, either.

I did make some progress with just directly tweaking particles, though I have a lot of concerns about keeping that performant.

The idea here was to sort of draw on the way energy bounces around in Harvest:Massive Encounter (such a neat game). Alternatively, I’d kind of like to have the particles be… “wispy windy light strands”? I don’t have any idea how to search for anything remotely similar to that, or appropriate textures/shaders/etc.

3. Vectrosity
Vectrosity is this great Unity extension I picked up to try to accomplish something akin to what I was doing with LineRenderer, but more performant and with less overhead. I think it accomplishes that, but unfortunately I think the particular thing I’m doing here runs into an issue Vectrosity’s developer Eric hasn’t taken on yet: Wide lines and sharp curves (even if using continuous lines/stripes/etc.) cause overlap. It seems like a pretty trick problem to solve in a performant way, so I can’t fault him, especially since he got back to me so fast about it. Great support/documentation. 🙂

You can see that issue in the image to the right (or below, depending on resolution). 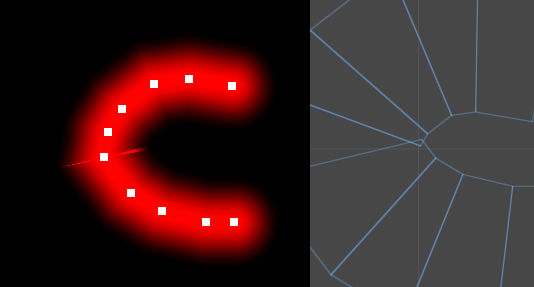 This also sort of shows what I was running into with LineRenderer. That overlap “spike” pops up wherever the curvature plays poorly with the line width, if you’re using transparent/additive/etc. textuers. (It’s low-point-density on purpose, and the white dots were for debugging. :P)

I played with various Vectrosity ideas/approaches for about a day, trying to come up with a way to yield a good-looking solution. So far no luck.

This issue is very similar to something I saw in Inkscape when creating the imagery for the vine effect in the previous Ghosts dev blog, which is that obviously separate draw calls for overlapping transparent geometry are going to make things look weird. As a result, I spent half a day trying to brush up on shader implementation, wondering if there’d be some low-hanging silver bullet fruit that would let me solve this issue. So far no luck, but I don’t think learning shaders is the most productive use of my time right this moment.

4. Particles: Part Deux! (plus Vectrosity)
Back to particles I go, and this is where I am right now. Essentially, my plan is to use Vectrosity to place a simple and constant line where the player has drawn, then use particle effects to gussy it up.

We’ll see what tomorrow brings. Particle effects are fun to work on, but the inherent RNG in finding something appropriate (at least given my low skill/familiarity) is frustrating.

So, that’s Ghosts for now.

Oh, and just because I find it interesting to see how other try to improve their craft, my reading materials the last 10-11 days have been:

Hope one of those turns out useful for someone. 🙂

That’s it for now.