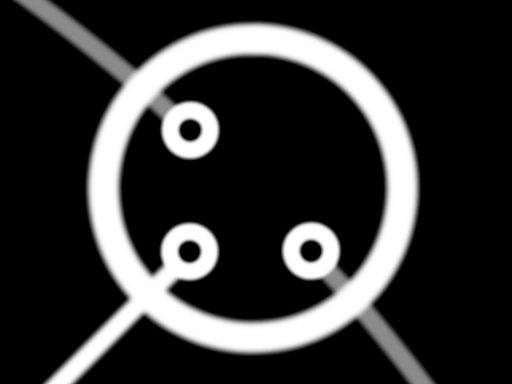 Visiting it and zooming in, we see evidence of an ancient alien intelligence in the very construction of the maze. This face, "The Face on Maze" is clearly not a simple trick of light and shadow, but rather an intentional construction. It stares back at us as though seeing not just our presence, but deep into our very identities. What is it you see there, Maze Face?

Coincident with the christening of SpaceRobotGames.com, we thought it would be good to discuss where Ghosts is (snort) and where it’s headed, and maybe shed a little light on the reasoning behind it.

The puzzle aspect of Ghosts arose initially out of an interest in making the oft-used magic concept less black box-y. What exactly do we mean by that?

If we imagine that magic has appeared in real life, what is the experience of using it like? If we ignore media where magic functions as deus ex machina, most of the rest seems to fit the following definition: Magic is a “physics-like force” that is controlled by some method that falls somewhere between programming (high- or low-level, your choice) and music (artistic, instrument-augmented, etc.). Within this analogy, magic in most games is basically an mp3 or an app: “Here, We Made This Neat Thing. Enjoy.” That’s the black box – looking inside of and/or fiddling with an mp3 or an app is a right reserved to its creator. The rest of us are expected to experience the product as it’s been presented.

With Ghosts, we wanted to toy with the idea of magic as a primal force, giving players various ways to manipulate it. This would be most entertaining in a fleshed-out game (maybe a Skyrim mod?), but we thought building a puzzle game around the idea would yield a more pure experiment. That puzzle game is 001.

Right now, it’s a bit like Minecraft’s redstone circuitry in that you have sources of energy you try to direct around. However, it’s a total mess!
Here’s a slideshow showing the solving of a “puzzle”, including a few bugs and a lot of ugly placeholder art:


[portfolio_slideshow id=1 exclude=”100,111″]
So the gameplay idea is basically to figure out how to merge/split/divide the power the inputs offer in order to match the power requirements of the outputs. The only aspect with any challenge is the mental bookkeeping.

We think that’s mostly rubbish, though it is an alright prototype. Moving on from here, we plan to get closer to the artistic, maybe even visceral idea of magic described in the pre-mortem, where players are able to experiment more directly.

First off, this means moving towards a more gesture-y interface with the streams of magic. Instead of shortest-path lines between those “nubbins”, you’ll simply draw the path you want the magical flows to take. The imagery we have for this is something like smearing a dab of paint out onto a canvas with your fingers. Figure 1 was the best we could do with our nascent GIMP skills in a reasonable timeframe. The white whirly bit here represents a divide operation, which can be placed into the path of any flow to cause the desired effect. We haven’t decided yet now robust this will be – heading down the path of faux physics doesn’t seem like a productive idea, but it would probably be fun.

The flows themselves should start feeling a bit organic, as well. The inspiration for this is somewhere between twisty vines and a Lorenz attractor. Basically, if a flow is loose (doesn’t connect to anything), it just zooms off and forms a circle. This circle will function (assuming Unity isn’t too finicky) as an interactive part of the flow, letting you drag it something like in Figure 2. 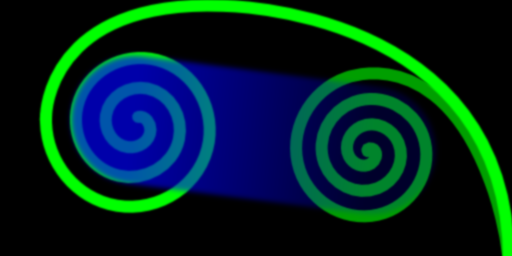 Generally, instead of focusing on the operations (these large clunky circles in the slideshow), we’ll be moving towards flow-centric interactivity. This means that you’ll draw the flows and then place operations into them to see how your whole magic-y puzzle-y system works as a result. Our hope is that this will yield a lot more playful, experiment-friendly experience.

Naturally, as the puzzle design evolves, so do the design aspects that can function as character growth.

We expect this shift is going to push us away from discrete power amounts to continuous-value power. That, combined with the experimentation approach, should be a good step away from that mental bookkeeping annoyance.

We’re working hard to develop a simple releasable prototype of the puzzle gameplay. This will likely be web-publishable due to the complete lack of a world map or any RPG stuff, and will really just be to test out whether it feels fun. It’s the core of the game, y’know? Better be fun.

We expect that will be ready around mid-month, though we’re hoping to push it out ASAP.

Alright, back to the code mines!