So, first off, I’m about 90% certain Codename:Ghosts will be named “Lyceum”.

In the interest of behinds-the-scenesing: I think “Lyceum”, as the name of the maze structure the game takes place in, is pretty representative of the project as a whole. Google searches seem to suggest that it hasn’t been used in the game space in a way that would be at all confusing. It also has a kind of nice shape/look to it. Has that “arcane tone” to it.

The main problem I see with it is that it’s terrible for gaming the iOS app store. I’ve read more than one dev suggest seriously that you should basically name your game with keywords. I guess Lyceum would be something like “Magic Puzzle Maze Adventure”, so that anyone searching for those terms would find it closer to the top of the search.

I decided to ignore that, because Lyceum is meant to be cross-platform (and because I don’t think Apple et al. will leave their searches so simplistic for much longer). I would rather go with a more aesthetically pleasing name than one that charts better. Hopefully that won’t bite me, but since I can’t know, I’ll happily pretend.

In other news: the playable demo has (obviously) been delayed, mostly by holidays. Secondarily, by a long delve into how to bend Unity’s Shuriken particle engine to my will. I hadn’t really played with particles previously, so that was fun (and a bit confusing/frustrating). I’m sure this delay will be heartbreaking to the 0 non-bots who have read any of these posts as of this writing. 😉 (Tertiarily: ramping up a job search, bills is bills.) 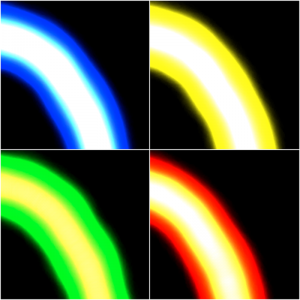 Sample of “max power” flows for each of the 4 elements.

However, I did get some effects I’m happy with (thus far). We’ll see if I stick with this style, which I’ve been calling “laser” style. Obviously lasers aren’t curved, but the visuals have had that energy beam kind of idea when I was testing them. (Maybe “plasma” is more appropriate?)

The alternative is “particle” style (unrelated to ParticleSystem.Particle), where magical energy looks like individual packets (or little short lines, if using stretched billboards). Hard to say from here!

In the course of working on particles, I did a bunch of work with Vectrosity, though ultimately I haven’t been able to use its stronger features, here. Still much better than LineRenderer, and I’m sure I’ll have other uses for it soon.

Remaining before putting up the basic playtest:

If flow pathing is drawing with a spray paint can, then flow deformation is a smudge tool. This will probably be tricky, since I can’t use colliders to determine what you’re interacting with.

One of the tough calls here has been whether to treat the user’s direct input as sacred (maintain high fidelity), or to treat it as representation of intent (translate, simplify). I’m currently leaning towards “input as intent”, because I don’t think the pathing is super important. I might offer a technique that lets users create “pins” (a bit like editing directions in Google Maps) that force a flow through a certain point, which is sort of a compromise. My main concern is flow interactivity – if it’s too hard to interact with what you’ve placed, that’s going to be super frustrating.

Deformation is going to force this decision, though I might try to implement it in a few ways and let them be toggle-y in the playtest.

Currently takes way too many taps/clicks to solve even a simple puzzle. The new technique and flow styles enable a simpler way, which should let me streamline this quite a bit. I hate UI friction: it is anathema to me. Hoping I can save hypothetical players from it too.

Techniques have been in for months, but in working with the particles I got some ideas about how they should be structured, so I may take a short (hopefully) detour to bring them in line with the new ideas.

Right now the puzzles are a bit confusing to work with, I think. There’s a lot of experiment-y cruft in them, so I’m going to clean that out and get them closer to the end vision. I’d like it to be clear when they’re solved (and that you’re even trying to solve them, hah!), as well as what it takes to solve them.

I think that’s most of that.

I happened upon a comment by r/gamedev veteran and Arnthak developer NobleKale that eventually lead me to his blog post on “building an empire”.
Highly recommended!

I’ve been reading about marketing for a long, long time, but this was (somehow) the first time I felt I was reading truly actionable advice.
I guess that’s not quite fair… This blog and my design blog are actions resulting from advice. Attending PIGSquad and UnityPDX meetings, joining in on a gamejam last fall, and my current drive to playtestability: all results of advice.

Each of those things had the feel of the contemporary SEO advice: “Just make good content”. Well, OK, that’s my goal, but what then? It feels incomplete.

That’s where NobleKale’s empire-building ideas step in, most specifically, getting in on this FF (Feedback Friday) and SSS (Screenshot Saturday) action. I’m fine with putting in more than I’m getting out, so I think this might be the right fit for me. My goal right now is to get into the first of those that I think I can bring something useful to. I don’t think that’s going to be this coming weekend, but maybe the next?

Now for the most exciting section: What I’ve been reading!