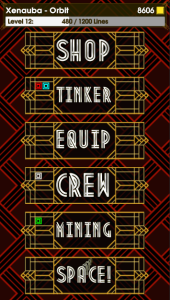 Mining with unfilled tiles, or… 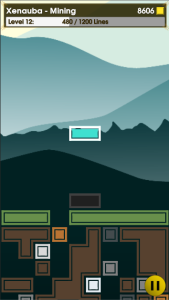 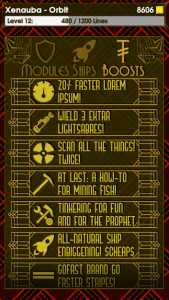 How the “Art Deco” aesthetic currently manifests itself in the shop. 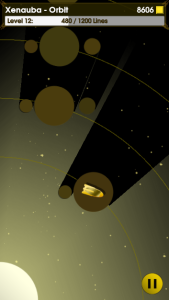 Flying around the solar system

I’ve been working on a game for a bit now. Its working title has been “Blocks in Space” (BIS), but I won’t be using that since it’s already in use by someone else. Sad.

In the hopes of getting some feedback, I’ll go into some detail on the current prototype. (Well, prototype-oid. It’s heavier than a prototype ought to be, but I hope that it will serve as a platform for many small prototypes.)

BIS arose out of a fairly simple premise: “What if Tetris had gameplay more like ‘mining’, and you got money/experience from clearing lines?” From that seed grew a fairly complete game idea… probably irresponsibly complete.

Along the way I got bored with the standard space game UI elements and decided I’d try, somewhat arbitrarily, to try utilizing an Art Deco aesthetic. This post and prototype is as much about that aesthetic choice (and whether it works at all) as it is about the gameplay. You may notice it’s not bursting at the seams with art deco-ness, but that’s an on-going effort.

In general, I’m aiming for strong geometric shapes and lush/opulent colors. Most of the colors you see here are taken from either the real colors of the metal (e.g. copper is properly copperly colored…ly), or from various famous Art Deco pieces. I’ve drawn inspiration from artist Tamara de Lempicka, stark geometric line art, posters, as well as architecture and product design from the period.

Making good use of this inspiration with my meager art skills has been challenging, but enjoyable.

The gist of the game: You’re the proud owner of a rusty, barely spaceworthy, new-to-you spaceship. Your ship is equipped with various stations, each providing unique space-y functionality. Using this functionality you explore the stars, seeking your fortune. Then, you spend that fortune upgrading your equipment, hiring crew members, battling hostile ships, etc. All this you do in pursuit of pieces of the “One True Block” (OTB). (trope incoming) ~The OTB fractured centuries ago, scattering around the galaxy. Legends say that reuniting the pieces will grant wondrous powers to whomever possesses it.~

Your ship’s functionality is manifested in various block-placement puzzle games (described below). You access them from an abstract main menu, which you can see to the right. The pattern behind it is an animated homage to Earthbound’s psychedelic backgrounds, though with concessions to match the art deco aesthetic.

Currently under consideration, in addition to the core “block mining” mechanism, are quite a few other puzzle minigame “modes” representing the different things you might want to accomplish. These modes are broadly split into three subsets of gameplay, depending on how the “block field” works.

1D (playfield is a long cylinder, as in classic Tetris)

2D (playfield allows freeform placement on any side)

Circular (similar to 1D but the playfield rotates, either ‘around’ you, or you sort of ‘orbit’ the playfield)

These modes are somewhat overwhelming, especially if all of them made it into the same product. To that end, one of the neat-o features (IMO), well-aligned with SRG’s mission, is that the NPC crew you hire will be able to play any or all of the modes for you. They will develop skill in each mode, improving their performance there. So if – perish the thought – you find a mode’s gameplay unpleasant, you don’t have to forego the benefits of success in that mode. You can task one of your crewmembers with getting really good at that mode, and just forget about it.

Essentially, each mode can be active simultaneously. You’ll get reports periodically about how your crew is doing, including any unusual outcomes, and otherwise just get to reap the benefits of their hard work. Nifty.

Stay tuned for more details on, y’know, everything!