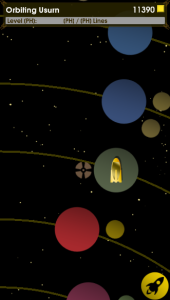 Still a work in progress, but much more colorful! 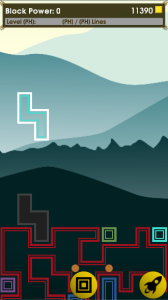 A very red planet indeed. Also, new tile artwork that helps differentiate inside from outside

Not quite “weekly” this time – the last two weeks turned out to be quite busy, so I spread out the same tasks over twice as much time. That said, it was a pretty good couple weeks, feature-wise.

As described in the last update, this sprint was about ‘coloration’ and ‘pips’. It also became a bit about procedural generation.

Previously, a dig site was made of this column of generated ‘materials’, mostly stone. At the surface you got a lot of dirt, and once you got to deeper depths you found more and more precious metal. The entire tile was colored according to this, so a ‘gold tile’ was literally that: a block of gold.

I found this weird – I wanted color to be a little less restricted. If I wanted a planet to be 30% yellow, I can’t just make it 30% gold without completely cheapening the concept of precious metals. Instead, I decided to go a little more abstract – the core colors are shared between blocks and planetary tiles. Now, any given tile can be any color – it doesn’t affect what you get for clearing that tile, nor the difficulty of clearing the tile.

A nice effect of this shift is that I was able to use the color distributions to produce colors for planets. Space looks much more interesting now, and planets seem distinct, different. When you arrive on a planet, you can usually see immediately why it looked a certain color. If it’s purple, it might be made of purple tiles, or it might be blue and red tiles, or some other mixture.

Clearing a tile of a given element gives you one unit of that “element”. Elements are tiles with ‘core’ colors – these will factor into a growth mechanic later, but for now they’re something like a “base crafting material”.

It may be easiest to think of these in Minecraft terms, honestly:

The Elements correspond to ‘stone’, ‘wood’, etc. You’ll be able to sell them as raw materials if you like, but I’m also considering adding another minigame/mode where you smelt them to try to get additional pips out.

In addition to ‘elements’, clearing a block can yield ‘pips’ of two varieties.

The “Metal Pips” are similar to the metals in Minecraft – you use them as the base material for craft-like work. In BIS you can also sell them for a tidy profit.

The “Special Pips” are 50% “unusual Minecraft materials like Lapis Lazuli”, and 50% skill point. In BIS, I intend to use these as a rare ‘gating’ material for significant upgrade paths. E.g., maybe you need to find two red pips to upgrade your Orbital Laser technology to rank 3.

Pips embedded in a given Element color will have a higher chance of matching that color, so you can go mine a planet with a lot of yellow tiles to increase your chances of finding yellow pips.

The ‘smelting’ mechanic is a way to let players target specific pips even more than that. If you really just need a lot of blue pips, then instead of selling your blue element drops, you can smelt them and hope to get pips. The odds are low, but it would be a parallel activity to mining, and lets you target your growth as needed.

I may or may not implement this mode/mechanic – being able to target planet colors might be sufficient.

As I was implementing the Element change above, I recognized it as a good opportunity to add the “hand-crafted” feeling.

By “hand-crafted”, what I mean is that there’s a sense you get when playing a game that helps you tell whether the content you’re experiencing was made by an algorithm or by a human.

In general, I think what makes content feel hand-crafted is patterns. This is of course a huge, nuanced topic, but in the small I think it can be summarized as “patterns”, maybe “templates”.
5/4/16 Edit: Slightly less in the small, I think this feeling is somewhat like the uncanny valley, but as a good thing. Too much order (patterns) and it looks synthetic. Too much chaos and it looks random. The goal is to walk a thin line between these, to impart a sense of meaning to the content without looking formulaic. The template system I describe below does not accomplish this, but it does move in the right direction. How to get BIS closer will be a topic again in future sprints.

So: the Elements a planet has are generated using four types of templates: “Uniform”, “King of the Hill”, “Power of Two”, and “Three-Tier”. For each type, we have at the very least two categories of elements, the ‘heavy’ and the ‘light’. For a couple, there are more.

The intent of this was to provide distinct patterns to how elements are distributed, rather than choosing random values. Although this is obviously still quite random (rather than “procedural”), the effect should be fairly similar, and can be made procedural very easily.

So far it feels pretty good, though I think there might be a bit too many “chaotic” options – it doesn’t look great when there are a bunch of single-element tiles scattered around the top of the dig. It doesn’t feel intentional.

I’ll leave it as-is until I have time to implement “micro-templates”, then re-evaluate. Micro-templates are a way to add patterns within the dig in addition to simple color distribution. E.g., the “great storm” from Jupiter, mineral veins, stripes, zig-zags, etc. Things people do if they were manually designing levels.

The main two topics next sprint are Difficulty and Stations/Shops.

The effort to clear tiles is currently static in a dig site, and the same between planets. The first change is to make it so that as you get deeper in a dig site, difficulty goes up. That is, each tile becomes harder to clear, demanding better blocks or better use of color/combo/etc. (Which isn’t in, yet.)

To provide some more difference between planets/moons/etc., I’ll be giving planets a ‘density’ parameter, which determines how fast difficulty increases. For moons, it will usually be slow. For planets, it depends on the size and density of the planet. Density will generally correspond to the richness of tiles as well, so you are rewarded for the extra work.

The first change will be to give shops a real inventory of new blocks to sell, so that players can start to customize their block deck. This will also include the ability to sell your own blocks to the store, so long as you have enough to build a minimal deck.