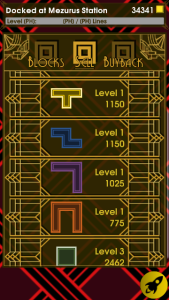 Currently you sell for 25% of the buy price… Generous? Stingy? I have no idea. 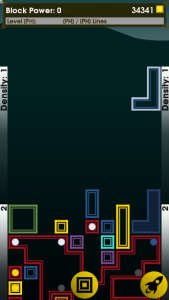 The “density” font isn’t working for me, but it’s fine as a placeholder

I feel good about this week: Difficulty and Stations/Shops. I’m actually a little bit surprised at how much more fun the game is now. It’s feeling more like a legitimate game rather suddenly, and that’s a great feeling.

For Difficulty, I changed planet generation to increase the toughness of tiles as you get further into the planet. You find significantly more pips, of higher quality, but it demands better blocks.

The rate at which this increases depends just on the planet’s “richness”, for now – the richer the planet, the faster “density” increases. (I don’t love that term, but for now it’s what I’ve got.) You can see to the right how this is indicated – for now these gradients down the sides of the play field show the current density, and how far until the next step up.

You can also see a somewhat subtle change in the screenshots: block shadow and glow (the outline when a block is ‘selected’ or ‘active’) are now tinted in the block’s overall color. I find this really helps emphasize the color-centric identity of blocks.

For the time being, this is poorly balanced. There are two main reasons for this:

The consequence of this lack of balance is that optimal behavior is to clear as far into a dig as you can doing one-clear-per-line (maybe two-clear), and then move on to another dig site. I don’t think that simply restarting is a fun path to push players onto, though, so I’ll be working on ways to fix this.

The changes to stations and shops have really helped increase how rewarding gameplay is.

The gist of what has changed is this: Each space station has its own shop, those shops have their own unique inventory of random (for now) blocks, and you can sell/buyback your own blocks.

On the right you can see the ‘sell’ tab, which looks mostly the same as the other tabs, ‘cept it shows you which blocks are in your current deck (glowing/highlighted).

Lastly, a sort of meta change: I finally put in a “save screenshot” debug command, so now I can start grabbing consistently-sized screenshots. What a concept.

Now that blocks are inventory items that have level and power, and now that that matters in some sense (thanks to density), I think it’s time to enable the first bit of real ‘character growth’ via Tinkering.

The core idea behind Tinkering mode is that you can tinker with any complex technology you own: your ship, your blocks, your ship and skill modules, your AI crewmembers, etc. Successful tinkering makes that technology better, and that’s the raison d’être for the mode.

Tinkering is a more strategic mode than the classic vertical style. You can move pieces freely in order to achieve the best possible solution. The quality and properties of that solution yield different effects.

What all will be impacted by tinkering is still to be decided, of course. The base goal is simple: a scalar Tinker-success metric translates to a scalar improvement in the object. E.g., you made it through three rounds of tinkering on your new U-block, so now it has +3 base power.

What I hope to do in addition to this is to allow for more nuanced change, so that in addition to “how well did you tinker?” there’s an orthogonal “what other interesting success did you have while tinkering?” E.g., if you managed to have only 2 colors, or all like-colors were contiguous, you might get boosts to the coloration power of a block, or maybe your AI will have an extra rank in “color awareness”, able to utilize color better than before.