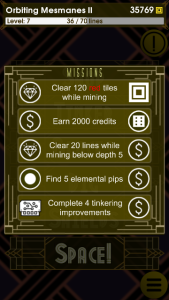 Work on the new “quest” system is nearing completion.

BAWD’s quest/mission system will have a bit in common with the daily quests in Blizzard’s game HotS (Heroes of the Storm). Rather than clinging to the idea of a ‘quest’ in the, say, Arthurian legend sense, HotS quests are a fully abstracted “accomplish abstract goal, get abstract reward” mechanism.

I think this is the right way for “quests” to exist for games that are merely adopting RPG-esque elements, as opposed to games that are heavy on the “Role-” part.

Moreover, to me, it appears that HotS quests are intended to drive variety in player behavior. You don’t want to lock into just one character for every game, because hey, 300g for playing a Warcraft hero for 3 games!

There’s a significant balancing benefit to variety in a PVP game, so encouraging players to do things they don’t like quite as much is reasonable, and quite effective. In a single-player puzzle game, that’s not quite as obvious a mandate.

Nevertheless, it’s good to get players to keep giving different parts of your game a chance, especially if there are qualitative changes occurring for those parts, periodically. Maybe the changes make enough of a difference that mechanics they previously didn’t enjoy are now enjoyable.

So, back to the point, questing in BAWD is sort of aligned with that goal: It provides a periodic impetus to play different parts of the game, while also providing both direction and high-impact playtime each day.