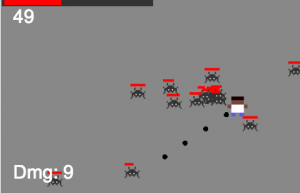 Kata are a fairly common/popular “deliberate practice” technique in the development world.

The “pottery” story may be familiar to many as well. (Sorry for the about.com link – not sure where I originally found the pottery story, and Google suggested that one.)

My natural lean is towards perfectionism. For whatever reason, I find myself painfully aware of defects or general design deficiencies. I know this is very common for creative folk, and I’m certain that Ira Glass had the right of it (for me at least) in this quote, which I linked to in my last news post as well.

The combination of these three concepts has lead me to the belief that the best thing I can do to improve as a developer, right now, is to make games. Lots of games. It’s not quite “kata” territory, because each one will be somewhat novel. Adopting a “create it, then throw it away” mentality would put me in the company of some of my favorite comedians. So why not?

I’ve seen a number of folks the last year or two making “Make a bunch of games” pledges. For my own HTML5 game-making, I started with the tutorials of one such individual, which got me thinking: I could do this too. I should do this.

So what’s my target? Am I going to make 1 game/day? /week? /month? I’m really not certain. My ambition tells me 1/day. Pragmatism suggests more like 1/week. Either way, we’ll see.

Rambling out of the way, what’s the junk I produced today?

Basically, it’s kind of a bullet hell game. It feels very similar (to me) to an extremely anaemic, ugly version of Solomon’s Boneyard.

For now it can be found here:
Play Bullet Heck!
If you’re interested in the code for some reason, have a look.

Note: It’s small (as of this posting, 480×320) because I wanted to experiment with the old iPhone landscape size. It doesn’t work on mobiles right now, maybe I’ll fix that someday.

I’m still fiddling with this one – the menu isn’t loading right now and there are some other weird things, but c’est la vie.
It took me about 8 hours total, including finding/making assets, learning Phaser, testing, tweaking, etc.

I expect there’s another 1-3 hours of polish in it, but I don’t expect I’ll do that today.

Tomorrow, I’m going to try to make that “cups” game I mentioned in my last news post. I’m anticipating a lot of headaches around getting quasi-intuitive ball physics in Phaser. Physics always seem to take a lot of time to get used to in each new library/engine.

My goal is to get it done in 6 hours or less. I’m actually shooting for <1 hour to produce a game, start to finish, so that I can actually make it a reasonable daily ritual. We'll see how close I can get to that. Phaser's pretty slick, though, so I think it might be possible. </streamOfConsciousness>