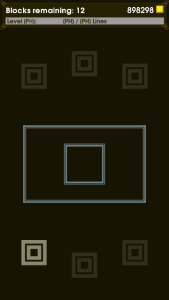 Soon the block bays will show loading progress, rather than being nondescript concentric squares

This week, more steady progress on Tinkering. On the right, you can see the initial placeholder tangram, along with the 6 ‘block loading bays’, where each of your blocks is built.

I think I’ll have to modify tile artwork slightly, soon. In the screenshot, the thinner bars above/below the central gap are actually two tiles high, but they look … smaller than that. Likely, this is because with the ‘tangram’ idea, you would expect the boundary to sit outside of the blocks you place as well. However, since I’m simply using the same tile rendering code as in mining, that boundary represents ‘actual’ tiles. Not quite sure how I want to fix this.

Additionally, it seems pretty obvious that you’ll need to do quite a bit of overlap to get these covered, unless you’re only using single-tile blocks. I don’t want to encourage that kind of degenerate solution, so I’ll have to think on that some.

Otherwise, I spent about half of this week working on the initial prototype for a different game. Progress was good, and it was refreshing to work on a game other than BIS again, especially since it’s not in the puzzle genre. Not quite ready to start talking about it, though. 🙂

The coming sprint is again split about half-half between BIS and The Other Game.

For BIS, I hope to get those ‘block loading bays’ functional, to where they’re spawning blocks, and filling their ‘backlogs’. I don’t know if I’ve mentioned that yet, but it basically means that once a block is spawned in a bay, if there’s additional storage space in that bay, it will continue building another block. When you pull the ‘main’ block out of that bay, it will be immediately back-filled by an extra block, if one has been completed.